(English only) I went out painting today and boy, that was exciting! – In a geeky way. First of all, I haven’t been plein air painting in a while, the very thought already gets me very excited and today too I got really nervous as I sort of got closer to it, i.e. whilst doing the dishes at home and packing my bags. I love painting out in the suburban wild but it’s also frightening because: you need to work so quickly since the light changes qucikly and I feel I’m not always up to that pressure. I really have to focus to get the drawing right in this set-up. And: I suck at colour mixing. 🙁 I am simply not disciplined and concentrated enough outdoors because I want to capture the scene. Bungling up the colours doesn’t help with that. Why do I not take my time mixing them properly? ‚Tis because this runs through my head all the time I’m painting en plein air: CAPTURE THE SCENE — CAPTURE THE SCENE — DON’T WASTE A SINGLE MOMENT! Sigh. And so I suppose even before I set out I am afraid of coming home from a little outing with a panel that is depressingly useless.

But today I got over that. I can be brave! So brave, in fact, that I even decided to try a new medium on top of mastering the other challenge. Yup. Instead of my trusted reliable watersoluble oils I took a basic set of oily oils and turps with me. I had the same colours as I normally use, i.e. Cerulean Blue, Lemon Yellow etc. but a different brand: I use W&N watersoluble oils and today used D&R Georgian oily oils. Sigh. The very idea of oily oils makes me sigh. They’re totally different. Don’t get me wrong – I appreciate the wonderful creaminess of those real oils, definitely. But of course they mix completely differently to what I’m used to. The Lemon Yellow is super weak! The Chrome Yellow was shockingly strong! To boot I didn’t manage to get the lid off the Ultramarine, so couldn’t really mix any cold greens (or so I thought). But then I dug out a tube of really old W&N Prussian Blue which an ex-boyfriend gave me years ago; they used to be his granny’s and so were probably purchased in the 1960s. See, that’s something you just couldn’t do with watersoluble oils because they do dry out. Which is one of the reasons I’m exploring other mediums.

Yup, and as if all that wasn’t enough I also chose a super complicated scene. It had water, reflections, all sorts of vegetation, lights of different colours, a few rocks…I had forgotten my viewfinder* which may have helped me in finding a simpler scene, but as it was I tried to capture (CAPTURE!) pretty much the whole ensemble of what I saw, minus the things I needed to leave out for sanity’s sake. This is the scene: 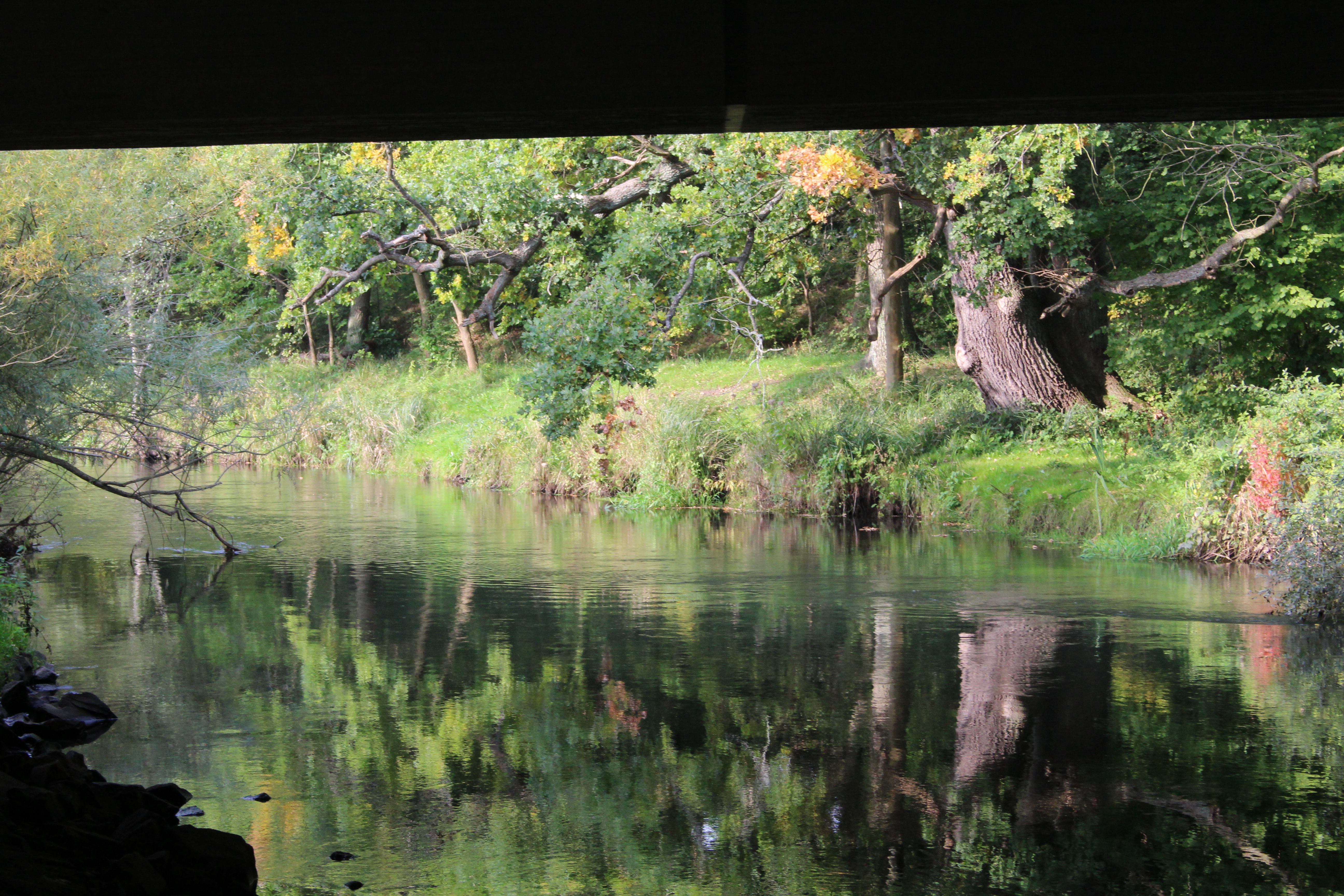 I set-up in an underpass; cars were roaring on top of me very loudly. My own little car is here:

I didn’t have the ‚oh my, will I be able to pull this off‘-moment today, probably because the whole thing was an ongoing struggle and so no one moment stood out like it usually does. An enjoyable struggle because of the lovely setting, but still. In the end I finished not because I thought ‚Yay! It is done!‘ but rather because I started messing up some parts of it by reworking them in a bad way. I gave it a few finishing touches at home, e.g. the branch that’s hanging in the water didn’t have a reflection, neither did the slim tree to the left of the two oaks. Simply forgot those. Oh well. What do they say? 500 bad paintings before you start to turn out good paintings? Well, this was my fourth plein air oil painting.

I’ll be brave again soon though, so stay tuned! Thanks!

*I realised just as I was done which part of this composition interests me more than any other: the branch hanging in the water and the little eddies it produces. I may have discovered this sooner using the viewfinder. Then again, the colourful foliage was very pretty and in terms of light/shadow contrast and chroma far outweighed the branch in the water. Maybe I needed to familiarise myself with the entire scene first in order to take a particular liking to that elegant branch?