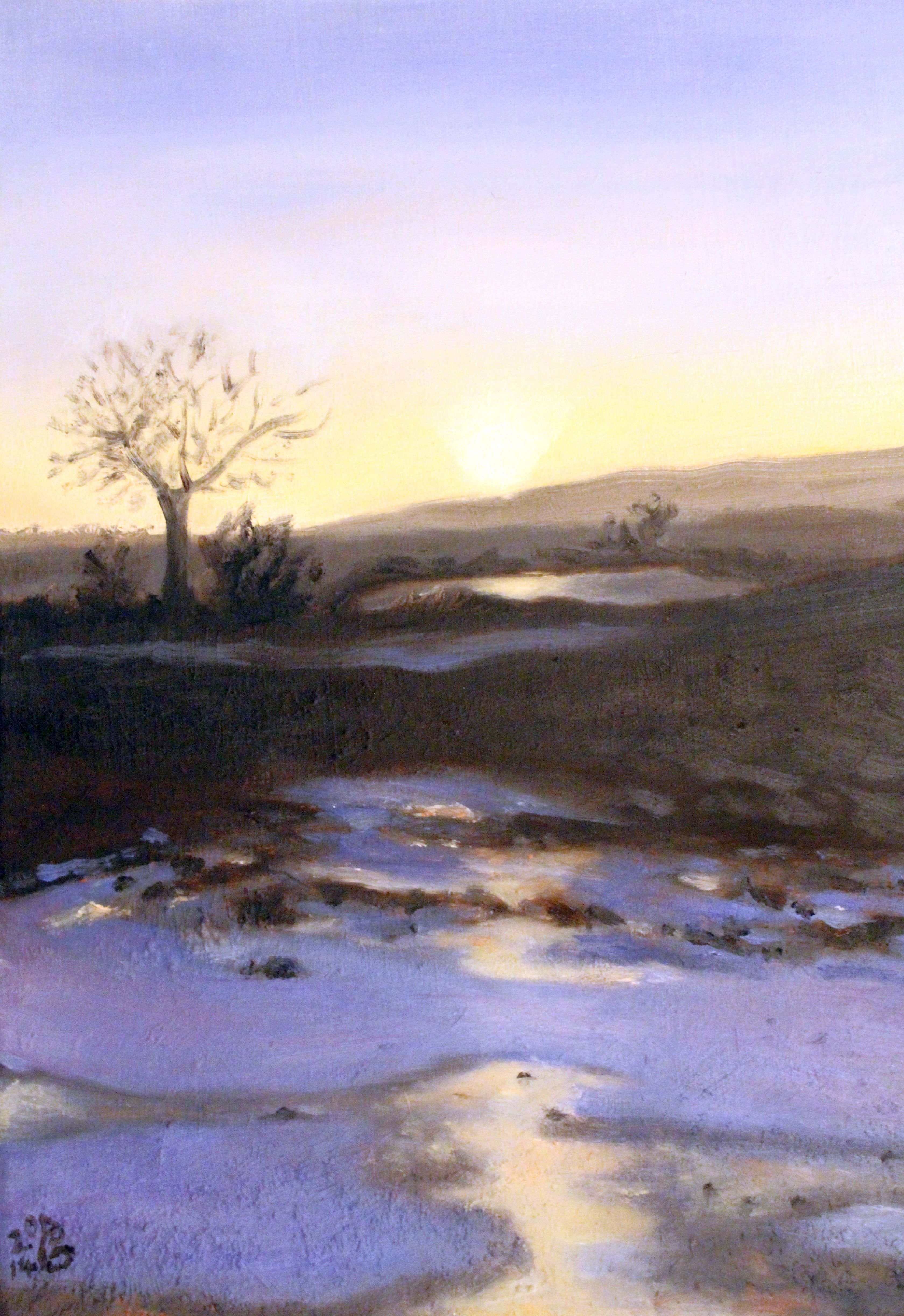 ‚Tis the end of the year. My blog host has sent me stats so that I know what I have accomplished this year on this here blog. The real accomplishment is not perceptible online, I don’t think, though having said that I will merrily repost my favourite painting for each month below the text plus a new one for December. Still, I am going to muse on what this year has brought me and my painting for a moment. (And I have done something similar on my professional site, in case you’re interested.)

This year has definitely brought a lot of changes for me. I started this blog in January and wasn’t sure if it was going to go anywhere. But it has developed well thanks to so many interested readers and commentators. Thank you! I have also stopped taking regular painting classes and have thus, apart from the occasional workshop, been painting on my own for most of the year. I don’t miss anything, I have to admit, and am happy to be working like this.

One of the major insights for me this year has been that it’s ok to paint small. I have been inspired to practise this approach by Carol Marine’s book ‚Daily Painting‘ whose subtitle says it all: ‚Paint Small and Often To Become a More Creative, Productive, and Successful Artist‘. Which is what I did, the painting small part and being creative at least (I’ll speak about the success in a minute). The reason I was so enthusiastic about the smaller formats is because I am not earning my keep with my art but with sociological research. Most of my waking hours go into reading, thinking and writing (or asking folk for their life story which is super fascinating!) which makes it difficult to paint large formats. The few bigger ones I started working on at the beginning of the year are still unfinished and might even be destroyed soon. (I am planning to invite friends for a ritual destruction of failed paintings in the spring.) Also, I have painted alla prima a lot more often than I thought I would; my original plan for this year had been to learn more about the classical layering technique of oil painting but I felt really silly trying that on tiny canvas boards.

My general approach has developed rather well, if I can say so myself. In February, I learned about thumbnails as a basic means of coming up with a satisfactory composition, and I have been a steady thumbnail sketcher since. I have sketched more in general and I find that it has helped me see shapes and relations better. I have also started paying attention to tonal values more. In general, I’d say that this year I made a lot of progress in terms of the basic elements of painting. I read heaps and heaps of blogs on painting and a couple of great books, the most noteworthy of these beside Carol’s being Mitch Albala’s book on landscape painting and Peter Wileman’s on capturing light in oil painting.

This might sound as if I was all about the oil painting but in actual fact I have painted watercolours a lot more than I have painted oils this year. My skill with this watery medium has improved as a result of that, although I’m still way too controlled with the watercolours for my liking – I just cannot let them do their thing! The June cows below who are a funny bunch – and I do like them a lot – are a good illustration of that problem. That this still hasn’t changed that much is a bit of a disappointment to me and something to keep working at.

Speaking of disappointments: The painting trip I had booked for myself this summer was also a bit of a disappointment. It was meant as a reward for myself for finishing a large project at work under difficult circumstances. However, I had not realised that quite a few folk would participate in such week-long trips because they genuinely want or need a holiday, painting for them just being a bit of a pleasant thing to do for parts of the day. I, in contrast, had intended this trip to be a bit more, well, trippy in terms of intense painting experiences and conversations with other enthusiastic painters and illustrators. ‚Twas not to be. I did have good times with the group and everyone was nice; nonetheless, I felt alone and comparatively obsessed with painting. But that was an important learning experience too. I am apparently quite serious about this painting malarkey!

I painted watercolours for most of the summer simply because they were more convenient to take along to places than oils. I don’t know how it came about but somehow I actually stopped painting oils altogether for a few months. During the time I didn’t use them, it always seemed like such a faff to get them out and to make sure the palette is clean and so on. Fortunately, I can report that I have been able to break through the barrier just recently, whoohoo! A professional painter prodded me a bit recently and encouraged me to keep working in oils, and that really helped. So right now I am working on a cow because that other cow painting this year (September) made me really happy. And I have been out to paint en plein air three times over Christmas in order to capture the sunrise. Funnily, all three attempts took place on overcast grey mornings, haha. The December painting below is the most interesting one of them.

I would count painting outdoors as one of my primary achievements this year. Ever since I learned that this can be done I have been wanting to do it. I love moods and light and colours and am a great contemplater of scenery, so painting en plein air truly suits me. But I was afraid to do it for the exposure that is connected with it. People coming to look over my shoulder and commenting ‚but that’s all crooked‘ – arrggh! My horror vision! And even though I have some experience with this approach now (not much), I am still scared. But also fascinated. Every time I paint outdoors, it is the most rewarding and the most frightening thing all at the same time.

So I have had a few successes in terms of learning and development. I have enjoyed receiving feedback on my work on this blog and I want to thank you all for your comments. I have also been surprised by people asking if they could buy my work after they had seen it here! I did not expect that at all. I have sold a handful of paintings and worked on two large commissions. I have also received a little reward for which I am very grateful! All told, having this blog has been lots of fun!

My plan for the new year is to regularly paint en plein air. My new work commitments mean that I will be away from home for parts of the week, but maybe I can go out and paint sunrises (or overcast morning scenes) on the days I’ll be here. In oils. And I want to try and see if I can use the small formats I paint in the field for painting larger formats later on. I have also been thinking about exhibiting for a while. Perhaps I will have an opportunity for it this year.

It will be a good year I hope, for me and for you, for the development of creative living all around and for togetherness not only through blogs but also through direct support and friendship. Onwards!

And now for my favourite paintings of this year!

February: Winter sunset. Not posted here before, as I just realised! 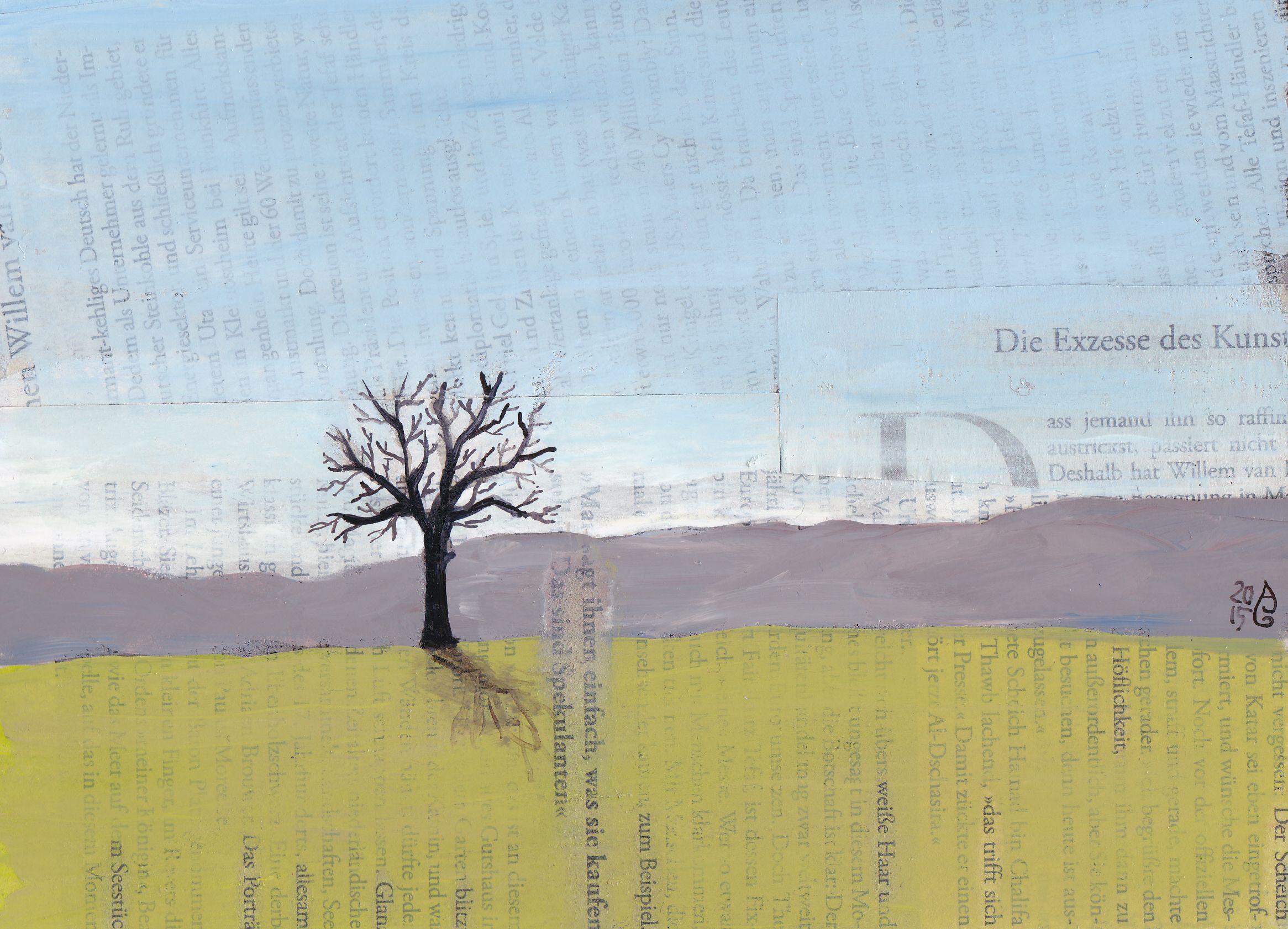 April: Along the railway line. 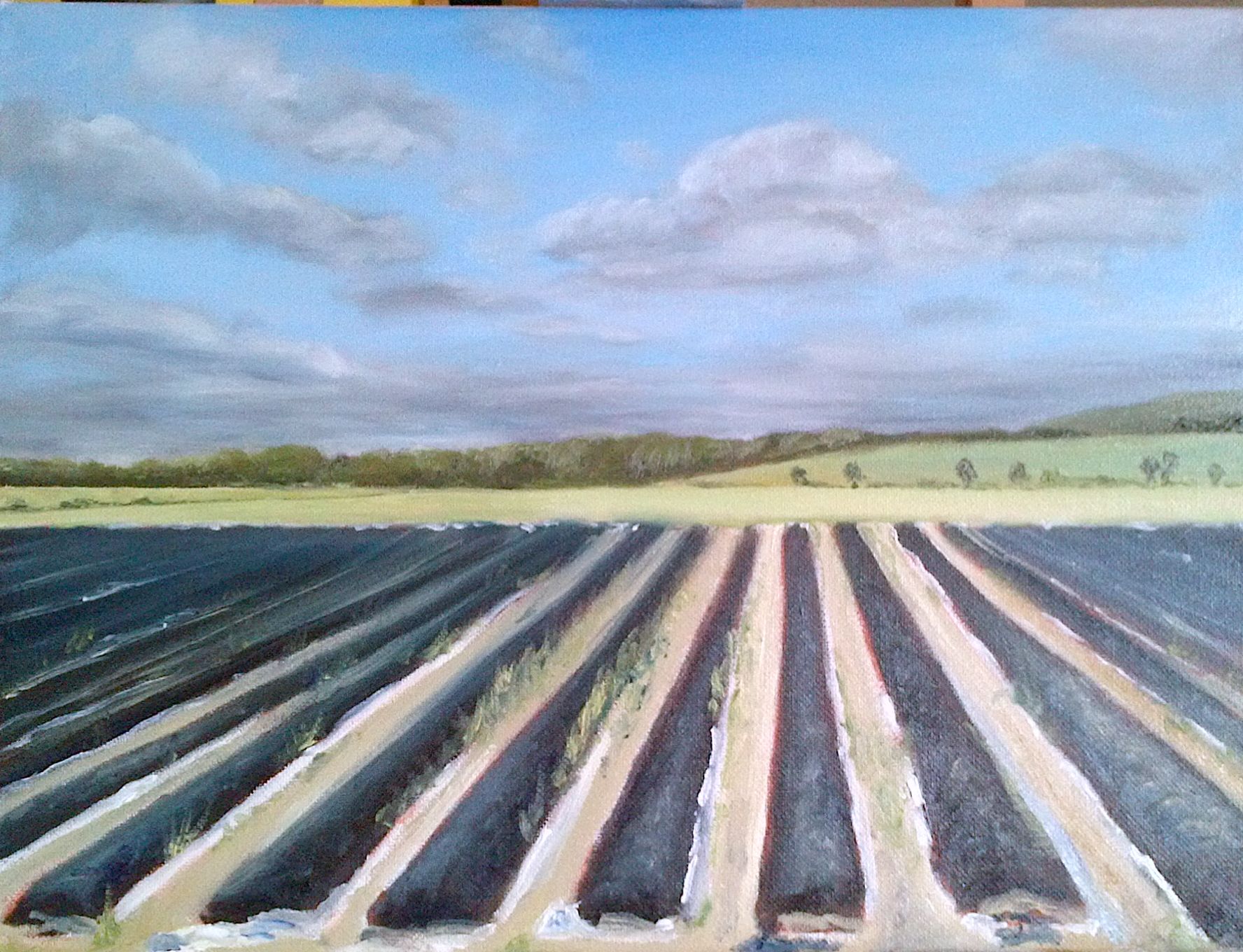 May: Asparagus land. I am from there. 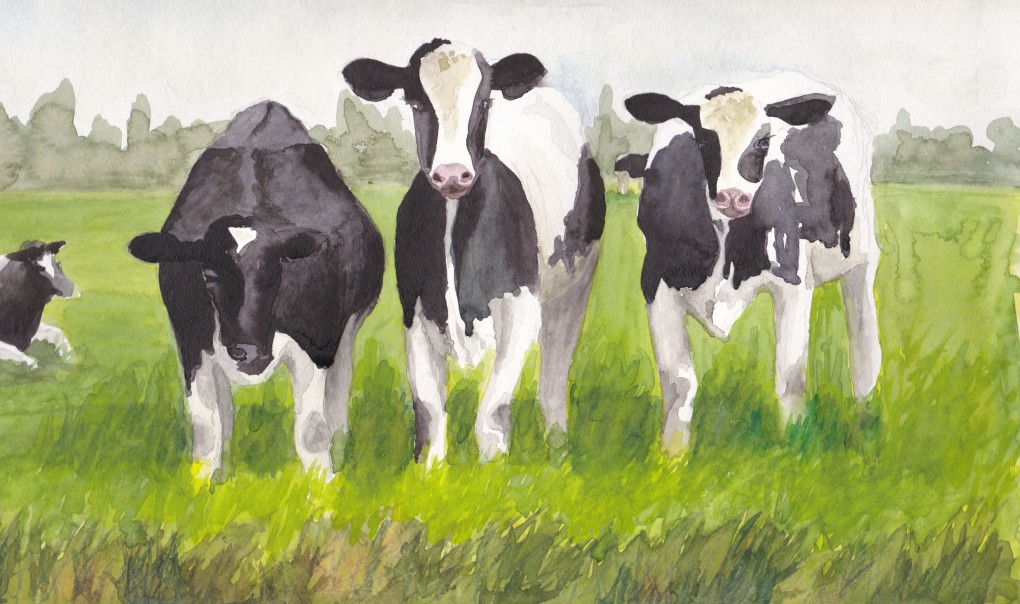 June: Fatty, Pretty and their friends. 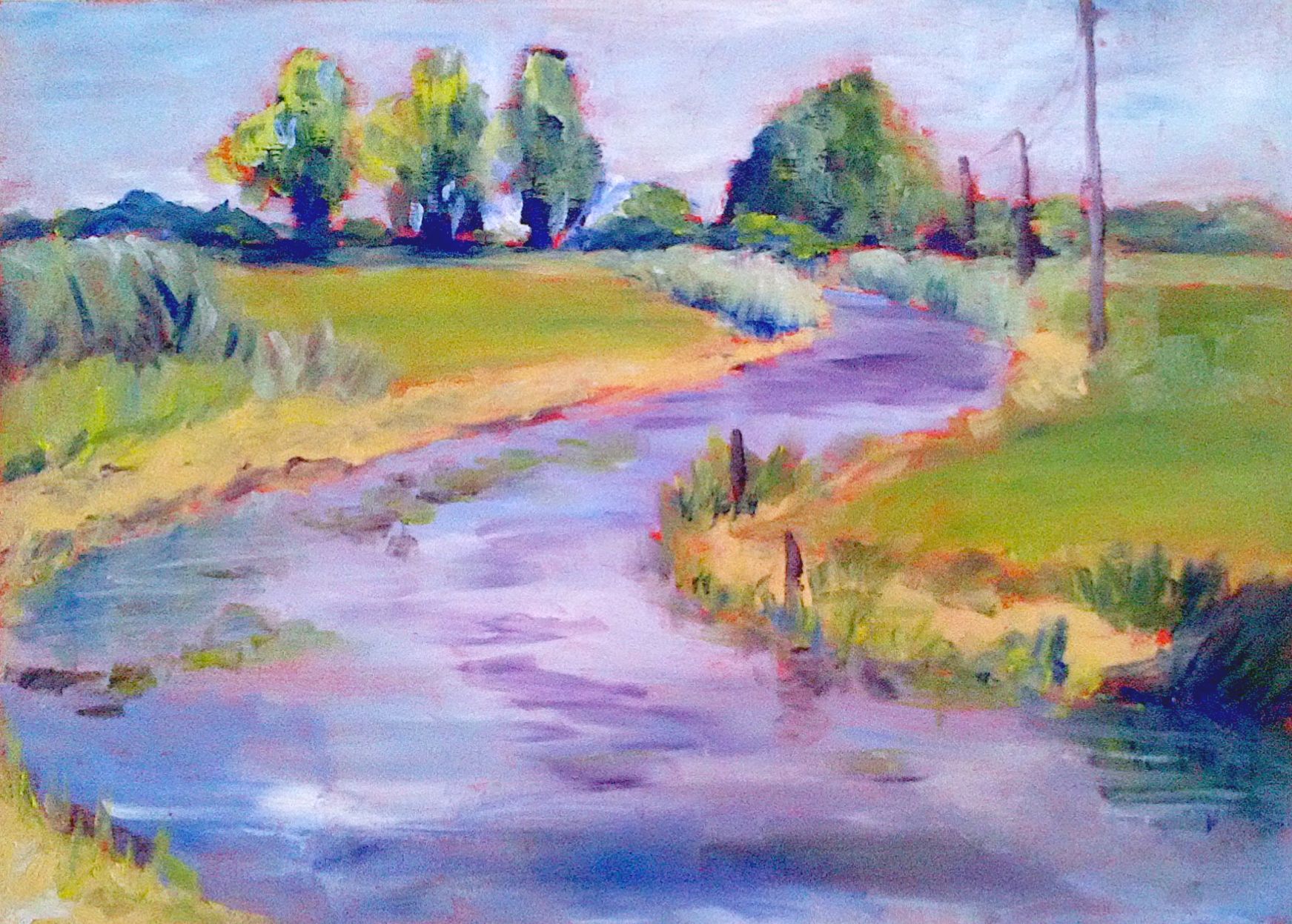 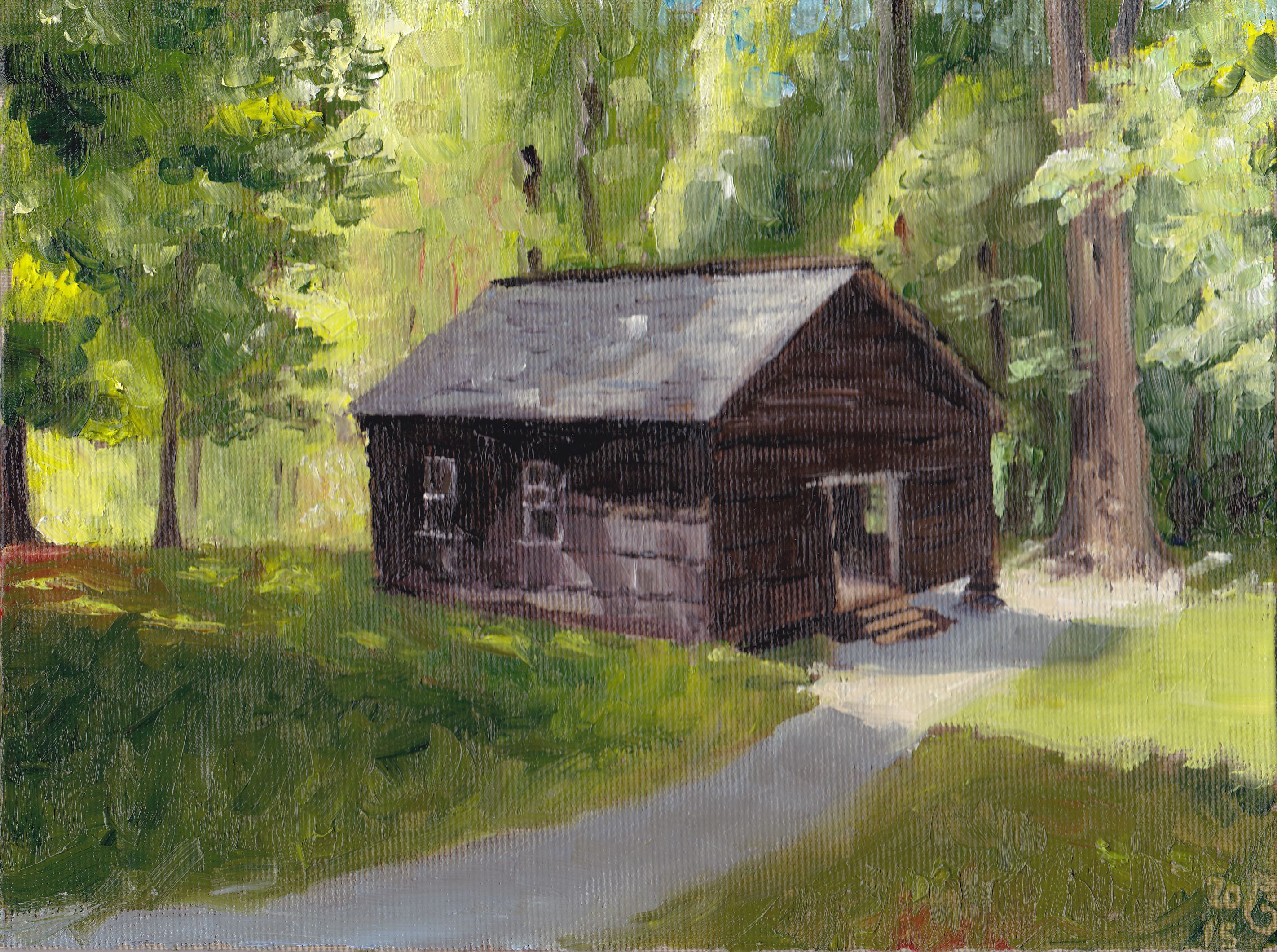 July: Little Greenbrier School. My father-in-law took my mother-in-law there on one of their first dates. 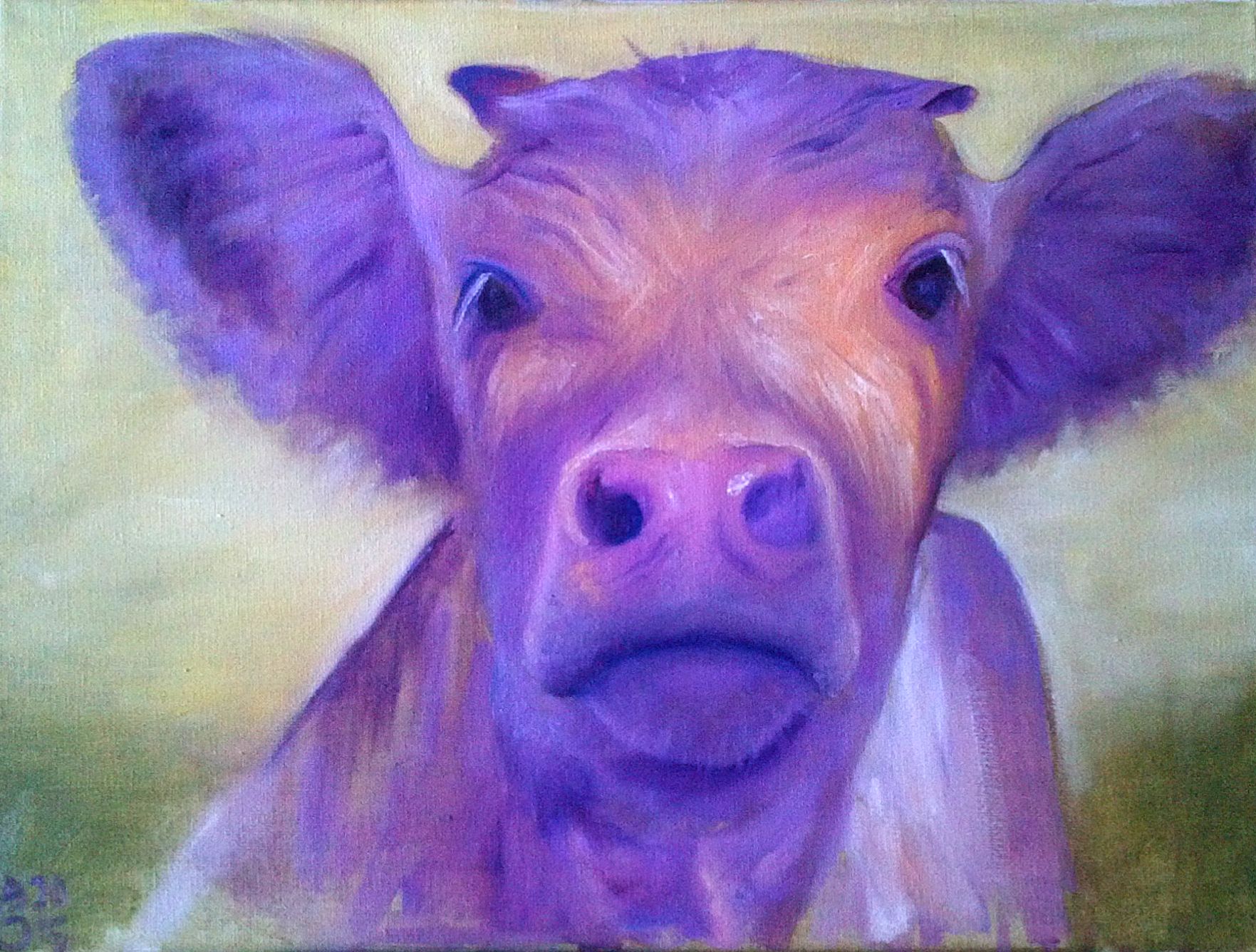 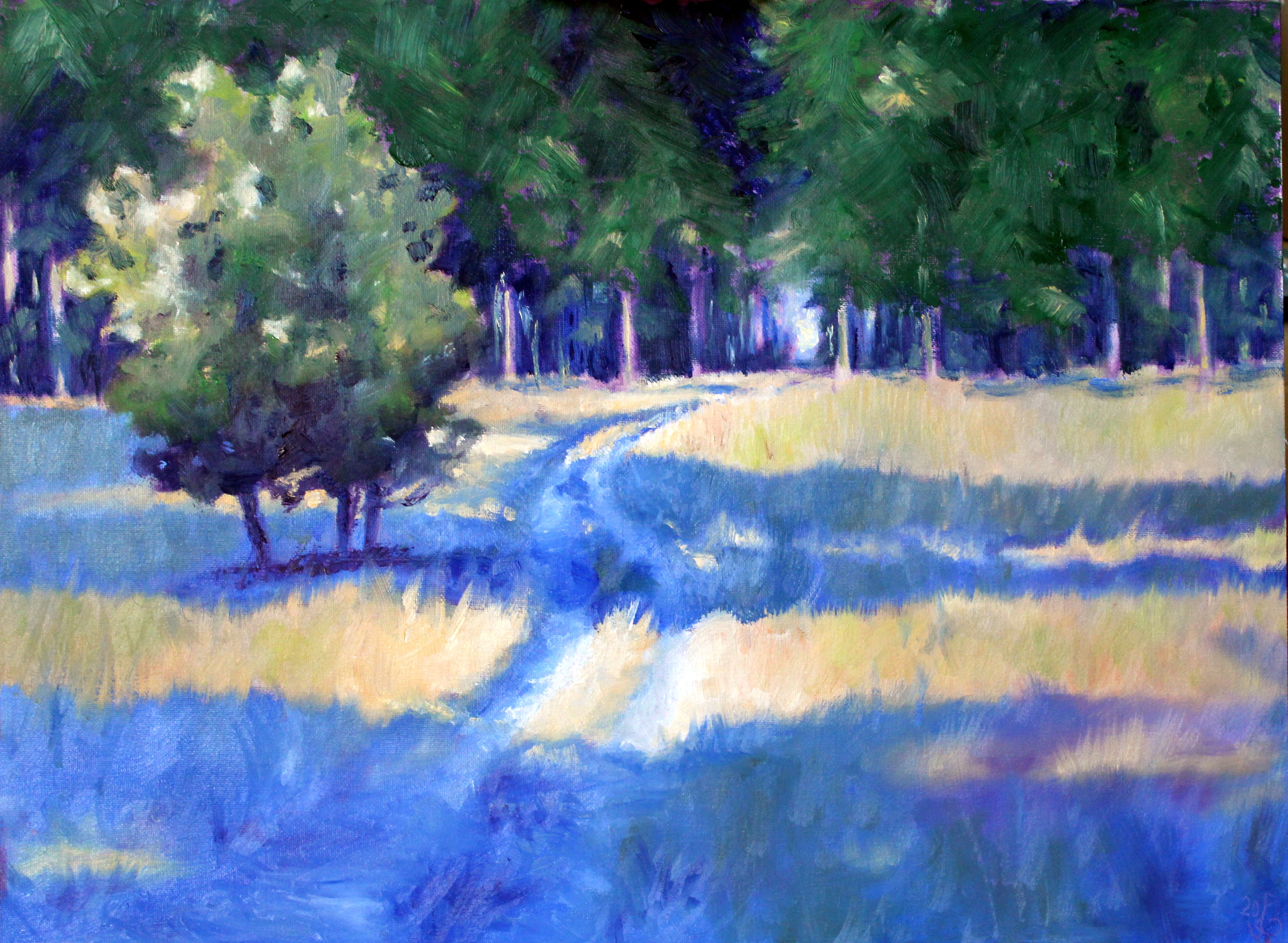 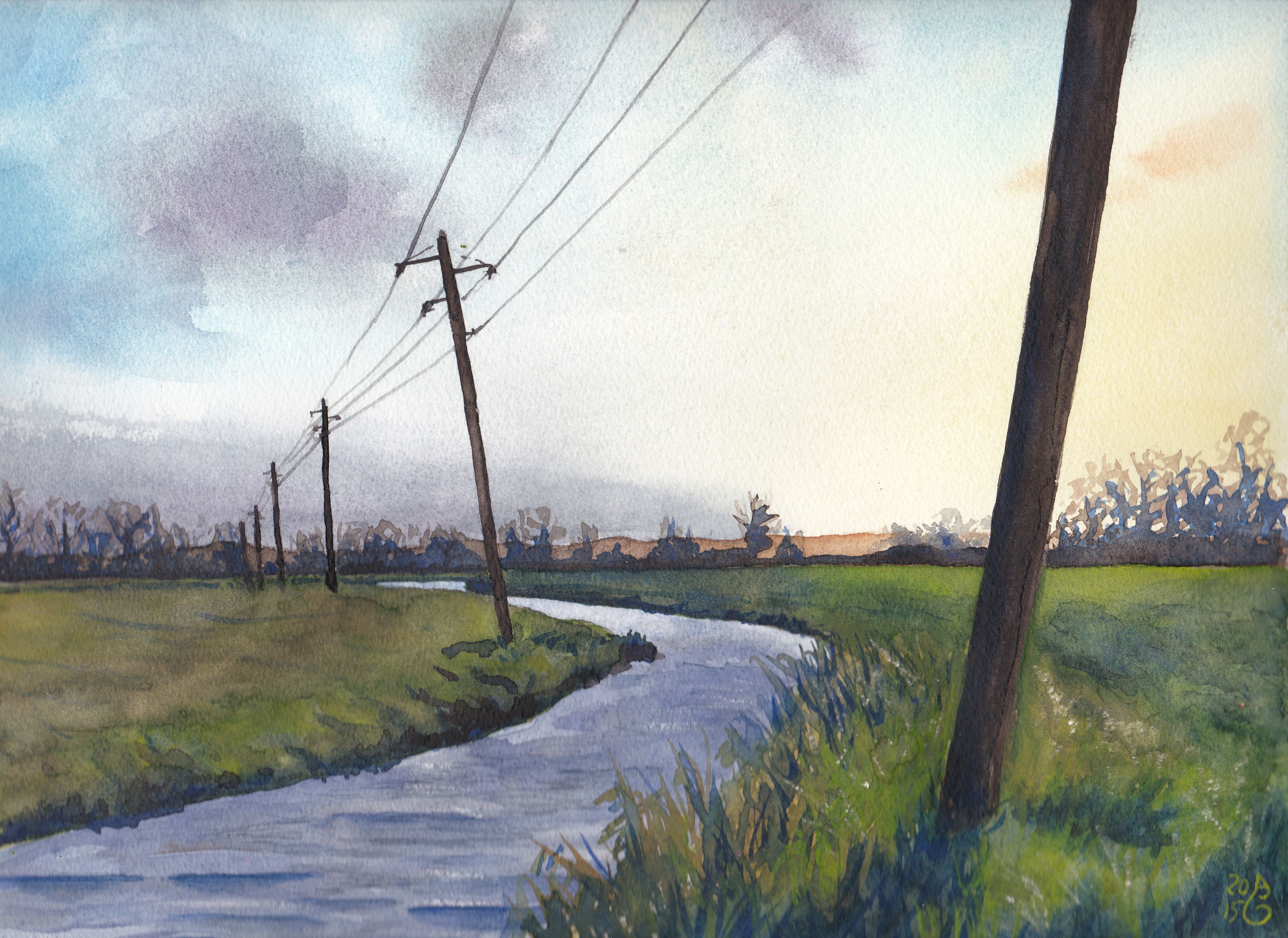 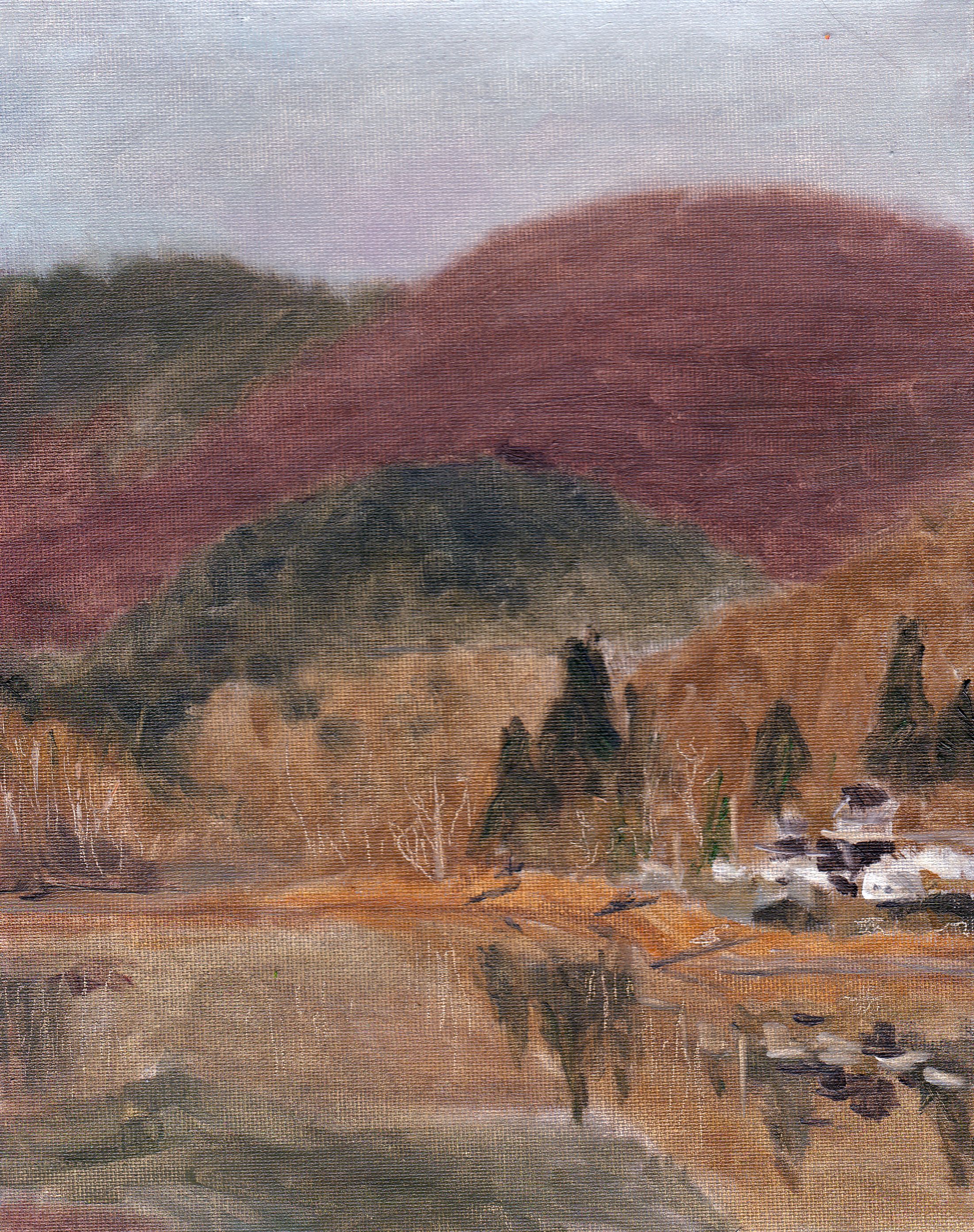